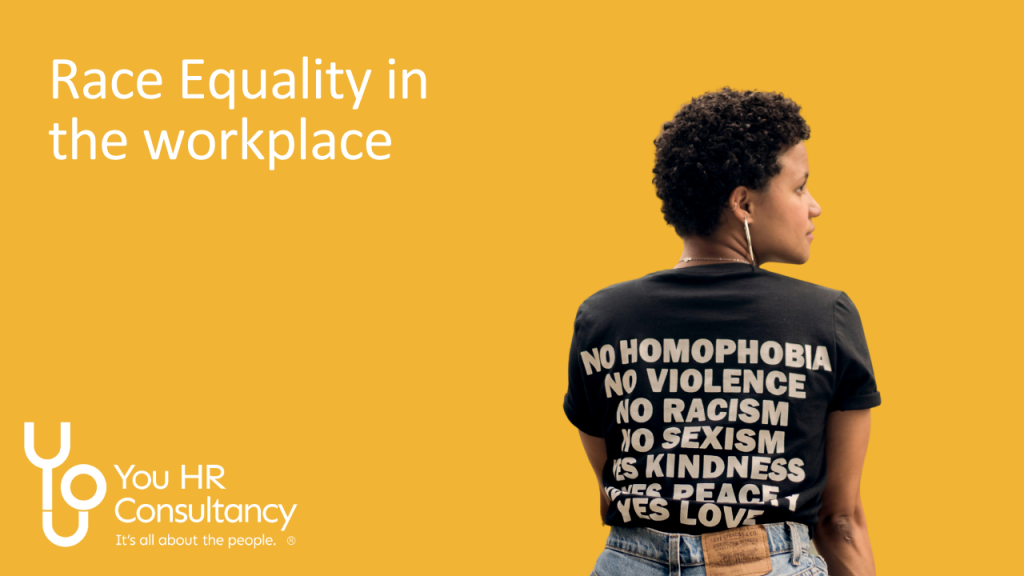 This blog is a piece written by Jonna about her personal experiences and how they have formed her drive for equality in all that she does. It includes a downloadable pdf of Race Equality Actions you and your business could undertake.

Where the realisation of racial impact began for You HR...

Born in Greenwich in the 1970s, I grew up with 3 generations under one roof of a 2 bedroom maisonette. I was far from being work-shy, it was instilled in me that to get anywhere in life you had to work for it. Weekends were spent from an early age, car washing for the affluent Blackheath neighbourhood, or working on Bill's fruit stall down Lewisham High Street market.

Looking back I'm blessed with the opportunities I had to explore the different cultures, societal riches of such diverse communities. At the time I didn't appreciate what I was experiencing. I was absorbing everything like a walking, talking sponge. I'd ask the question of 'why' a lot as a child, particularly when starting to realise indifferences; how people would react about my name, about being from a single-parent family... I didn't understand why it mattered? But I was acknowledging the different treatment received, the way some people's tone in conversation, behaviours would change.

I never knew my Dad, some say he was Maltese, others suggest Italian. I would always (and still do) get asked "but where do you come from" when I say my name and that I'm from London. Comments about my dark hair and the texture of it, my dark features, skin tone especially when I get a suntan. It took a long time to comprehend why such questions were asked and comments made; I guess in today's world it's what we now call 'micro-aggression'.

When I was 12 we moved to Thamesmead in the 1980s. The Southeast London ‘suburb’ built in the 1960s on 1,000 acres of green land, filled with waterways and lakes; a Greater London Authority (GLA) ambition to be one of the largest housing estates in Europe. With the majority of accommodation on first floor living to minimise flood risks, it provided avenues of basements garages and walkways connecting different stages of this innovative architecture. It became known as a Concrete Jungle. Street lights often didn't work, you always went around in a crowd, you stayed away from certain areas, particularly at night.

My standing out as 'different' became more apparent moving to Thamesmead. Life was tough and I was starting to realise more societal problems. Forced to learn how to stand up for myself and for others (I by no means had it anywhere near as hard as others from the non-white community). I knew what was right from wrong and was forming my beliefs. Peer pressure was rife. I was getting a reputation for 'speaking and standing up' (my mum would refer to me as Citizen Smith 'power to the people'). I never forget my response when being told I wasn't allowed in a friends house by her parents because they didn't want a '"paki'" in their home, all based on my name and taking one look at my appearance!

To get a feel for Thamesmead's environment, those that have seen Stanley Kubrick's 1971 film 'A Clockwork Orange' or Alan Clarke's 'The Firm' with Gary Oldman - both compelling the real life of the community.

There were some good moments and memories of life on Thamesmead, but with a reputation in the 1990s as the UK's capital for fraud and other shocking statistics, you can get the gist that crime rates were high. You learnt how to turn a blind eye and just accept a lot of goings-on and you chose your fights wisely as to what you would get involved with or walk away from. With very little to do in Thamesmead for younger generations, most kids took to the street. The tension and 'turf war' between the community itself or neighbouring London boroughs, credibility stakes of a gangs reputation ran high.

A massive divide and blame culture was intensifying, the accusation of jobs and housing being taken from the white community and given to the 'foreigners'. Word had it that the Government were paying families in an attempt to increase the ethnic minority population of people being housed in Thamesmead and force different cultures together. Whether or not this was the case, there was no support infrastructure in place to assist and defuse the increasing divide. It just fuelled the fires of the British National Party (BNP). They had a real presence in Southeast London and were gaining a stronghold on influential gang members from splinter groups like the NTO (Nazi Turn Outs) that were taking over the streets of Thamesmead. Emblems sprayed across every inch of walls in the concrete jungle, to claim the patch of the community that was run by what gang.

Many times courage overcame fear to 'stand up', and this forms our core foundation of You HR Consultancy today and emphasises our strapline of "it's all about the people". So much of the Consultancy stems from my background and life experiences. One particular memory especially, and the reason for writing this paper today...

On the 21st February 1991, the impact and extent others would go to based on 'racial differences', catastrophically and devastatingly exploded. I was 14 at the time.

A dear school friend of mine, my drumming buddy, Rolan Adams was savagely and most brutally knifed to death, in front of his brother Nathan, by a gang of white racists, in Thamesmead. A life taken for no other reason than the colour of his skin.

He was 15 years old, an incredibly talented beautiful soul. The 21st March 2021 marks what would have been Rolan's 46th Birthday. The 30-year memorial was incredible, hosted by Rolan's family. The rawness of their loss, still so apparently felt.

I was humbled taking part in the marches that proceeded Rolan's death, on Thamesmead soil. I couldn't believe that even though a life had been taken and we were marching for our 'community' voice to be heard; we were spat at, had all sorts hurled at us. We were made to feel intimidated and scared, by so-called members of a community, chanting "nigger lovers", all for trying to have a voice and make a stand that such senseless killings needed to end. As one society we needed racism to stop. We were relentless, we did not give up, but what really has changed in society?

Tragedy continued with more racist attacks and many more lives lost. Two years later on the 22nd April in 1993, Stephen Lawrence was murdered in the neighbouring borough of Eltham. By this time I was at college and was studying law. I wanted to be a criminal lawyer but I was questioning what difference I could make in a system, where those associated were themselves institutionally or otherwise, known as racist.

Both the Adams' and the Lawrence families were subjects of police surveillance, subjected to questioning in a way that was disrespectful, derogatory and an absolute disregard for their loss. They were treated as suspects, why?

As an employer what has the Metropolitan Police really done to educate its workforce? To approach their work with insight and understanding regarding racist attacks, to embrace and handle with care and respect the riches of diversity and the differences in the communities they were (and are) there to protect and support? Has the Met really eradicated institutional racism now, 30 years on?

A career for life

In 1999, I had chosen my career to work in Human Resources. I had found my calling, my purposeful career; an opportunity to help and influence many, positively, where I could and make a difference. Whilst I remain eternally grateful to Royal Mail, my employer at the time, who supported my studies with the Chartered Institute of Personnel and Development (CIPD) I realised there was a long way to go to change many mindsets. My first investigative case was to support an internal review following the death of a 26-year-old black postman, Jermaine Lee. It was the largest internal investigation in its history and led to almost 50 recommendations for change to prevent a similar tragedy from happening again. Jermaine's family brought a posthumous claim for racial discrimination against Royal Mail. He had been bullied by colleagues at the depot where he worked. In Jermaine's last note to his family he said "Those guys at work hate me. Tell them... they have won."

I am deeply passionate to try and make a difference in an environment where a lot of society spend their time, the workplace. Over the years and recently too I've experienced first hand, age and sex discrimination/harassment and bullying in the workplace.

I have realised we cannot rely on the next person to speak up and take action, we all have a responsibility to create a society that is equal and inclusive to all. I have made a lifelong pledge to Nathan, Rolan's brother, that I will never give up... Discrimination of any kind needs to stop.

As adults in employment, and even more so where we have families, friends and other groups we associate ourselves with, there is an opportunity to change, through the masses and encourage others to do so too. Whilst I am proud of what I have achieved and who I have become as an HR professional, I could do more, we all could.

My focus on equality, fairness and inclusivity regarding the diverse differences between us is engrained in all we do, differences should be celebrated not condemned. You don't need to spell it out and label specific policies, process or practice about race. Make a statement, by all means, to share what you stand for and engrain your stance in your practice, but we need to reach a point where such focus on equality should come as second nature to us when considering all dimensions for those we work with, that are our customers/clients, that we support and do business with.

As a small business, we might not have the diverse workforce we want to have in place but that's irrelevant. We have an obligation to support, to help influence, educate and instil best practice regarding respect and dignity for others, regardless. Whether your workforce is small or large, why wouldn't you try and help to make a difference and ensure mindsets align with that of your organisation? Why wouldn't you try and help in whatever way you can?

If you would like to talk more about how your business can take actions to improve race equality please email alice@youhr.co.uk.

Our academy houses a number of templates that can help you. Please visit the HR Content Library pages to find out more.

For more information on national statistics visit the Equality and Human Rights website.

« Employment Legislation Changes
The employer's roadmap out of lockdown »
Ready to get started?
Please click below to start your journey with You HR in discovering how our services can assist you.
Book Your HR AuditFree HR Healthcheck